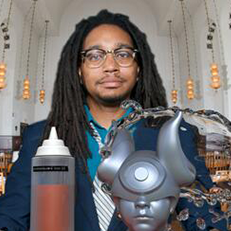 complexmovements.com
talkingdollsdetroit.com
@westiv
Wesley Taylor is a graphic designer, fine artist, musician and curator. He has spent many years “scene building” in the Detroit hip-hop community as both an emcee and graphic designer. He is co-founder of Emergence Media, along with Invincible. Taylor’s most recent body of work revolves around the promise of the future; he imagines that “the future” is his client and he is in charge of marketing for “the future” and branding its many possibilities. Taylor holds a graduate degree in 2-D Design from Cranbrook Academy of Art and teaches design at Virginia Commonwealth University. He also manages a five-person artists’ studio collective in Detroit called Talking Dolls.

He’s a member of Complex Movements, Detroit-based artist collective supporting the transformation of communities by exploring the connections of complex science and social justice movements through multimedia interactive performance work. Their most recent project, Beware of the Dandelions, is an interactive multimedia installation exploring the relationship between complex sciences and social justice movements through science fiction, music, projections, animation, workshops, and organizing. From 2015-2016 the group took the project on tour to Seattle, Dallas and Detroit. It has drawn critical acclaim and attention from the likes of Art in America, The Independent, Fader, and the Creators Project to name a few. The project is inspired by Grace Lee Boggs, Charity Hicks, Sheddy Rollins, and Detroit movement networks. 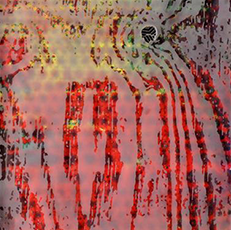