marymattingly.com
@marymattingly
Mary Mattingly creates sculptural ecosystems in urban spaces. She is currently working on a floating food forest for New York called “Swale” and recently completed a two-part sculpture “Pull” for the International Havana Biennial with the Museo National de Belles Artes de la Habana and the Bronx Museum of the Arts.

Mary’s work has been exhibited at the International Center of Photography, the Seoul Art Center, the Brooklyn Museum, the New York Public Library, deCordova Museum and Sculpture Park, and the Palais de Tokyo. With the U.S. Department of State and Bronx Museum of the Arts she participated in the smARTpower project, traveling to Manila. In 2009 Mattingly founded the Waterpod Project, a barge-based public space and self-sufficient habitat that hosted over 200,000 visitors in New York. In 2014, an artist residency on the water called WetLand launched in Philadelphia. It is being utilized by UPenn's Environmental Humanities program. She also recently installed a partially under water bridge in Des Moines.

Swale: A Floating Food Forest in NYC
What if healthy, fresh food could be a free public good, and not just an expensive commodity? In litigious New York City where most everything is for sale, “Swale” is a 5,000 square-foot floating park and edible landscape made of perennial plants. It traversed the waterways in 2016, serving approximately 500 people a day. Swale began on the water because in New York it's illegal to grow and pick food on public land. With Swale, we want to reinforce water as a commons, and work towards fresh food as a commons too. 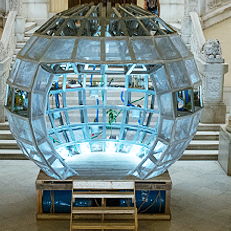