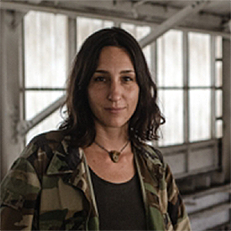 neworleansairlift.org
lukeanddelaney.com
@NOAirlift
Delaney Martin is a multi-media installation artist and creator of performance spectaculars. She is a co-founder and Artistic Director of New Orleans Airlift, which highlights the city's underground art and under-the-radar artists, transporting the dynamic street culture, living folk culture and growing contemporary arts scene of New Orleans to far-flung locations around the world for exhibitions, workshops, festivals, performances, and collaborative projects. She is also a founder of Airlift’s musical architecture project, The Music Box Village, which she conceived and continues to lead iterations of.

Airlift was founded in 2008 by Jay Pennington and Delaney Martin, as a response to the unparalleled destruction of Hurricane Katrina and its devastating aftermath which left local artists struggling for their lives and livelihoods. They recognized a need for new audiences who could support these artists as they rebuilt their city. They dreamt up a one-time project that took city artists to Berlin and called it The New Orleans Airlift after the Berlin Airlift of WWII. Other exchange projects that used an import/export model and a multidisciplinary approach soon followed and the name stuck.

Panel: Interaction & Outcomes
So what comes of all this? Let's talk about what happens during and after interaction and what makes a project successful. Is 'awe' a form of activism?
Collaborative Harmonics
This talk will cover the inception to the current state of art collective New Orleans Airlift's locally loved and internationally celebrated project The Music Box - an experiment in Musical Architecture. The project is also an experiment in radical collaboration and the presenters will talk about the challenges, but moreover, the incredible value of working together to build a larger whole - in this case a village of harmonizing musical houses. We will also talk about where the project is going now and how to be involved.